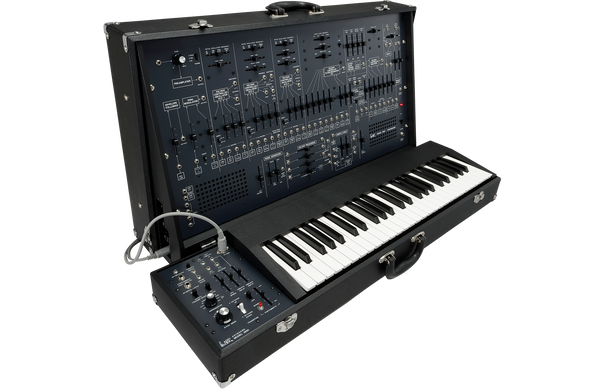 The ARP 2600, built between 1971 and 1980, was a legendary analog synthesizer. Now it’s back — for a limited time! Combining the massive sound-shaping capabilities of modular patch-point architecture with the immediacy and user-friendliness of normalled signal paths, the semi-modular 2600 delivered the perfect blend of power, portability, and ease of use. Today’s ARP 2600 includes modern upgrades such as USB and MIDI DIN connections, XLR audio outputs, and the upgraded ARP 3620 duophonic keyboard with an added arpeggiator/sequencer. This ARP 2600 is a very limited edition, so if you have ever wanted to get your hands on this iconic synth

Your chance to own a synth icon

In the 1970s, the ARP 2600 changed the sound of modern music. It went on the road with synth pioneers like Weather Report’s Joe Zawinul, who toured with two of them, linked by a custom interface designed by his keyboard tech. From Edgar Winter to Stevie Wonder (who had his 2600’s control panel labeled in Braille), the 2600 was everywhere. It even starred on the big screen — used by sound designer Ben Burtt to create the voice of R2-D2 in the original Star Warstrilogy, and also to generate sound effects for Raiders of the Lost Ark. Now ARP is bringing this iconic synth back for an exclusive, one-time-only production run. They will be available in limited numbers and when they’re gone, they’re gone. So our advice would be to grab yours while you can.

More than a synthesizer, the ARP 2600 is a complete sound design studio. In today’s hybrid analog/digital music production environment, the 2600 is your bridge between the essential components of modular synthesis and the hands-on immediacy of a real-time performance/production synth. Of course, it’s fortified with an arsenal of oscillators and envelopes, a filter, and amplifier — the building blocks of classic analog synthesis. But the ARP 2600 takes you way beyond the basics with an onboard spring reverb tank and even stereo monitor speakers. The 2600 offers much of the functionality of a vintage modular synth system, including ring modulation, lag and voltage processors, an envelope follower, audio preamp, a clock-able switch, noise source, a sample & hold module, signal inverters, an aux mixer, and even parallel-wired/multi jacks.

Any synthesist who’s had experience programming fully modular synthesizer will tell you it can be a frustrating experience getting up to speed with a new, unfamiliar system. The key word here is “programming,” as every signal path must be patched from scratch before the synth will even make a sound. There are no great-sounding presets that can be used as is or to serve as starting points for your own explorations. With that said, modular systems offer flexibility that non-modular systems cannot. You can include any and all modules in a “patch,” in any order. Because there are no real rules governing modular programming (other than common sense ones like “start with a sound source”), you can definitely patch your way into sonic malfeasance — or “happy accidents.”

But the takeaway is that, although fully modular systems offer amazing sonic dexterity, they do not particularly lend themselves to live performance. That is, unless you’re perfectly happy to play just one sound all night. Wouldn’t it be nice if there was a synth that offered the best of both worlds? ARP was thinking just the same thing when they designed the 2600.

Best of both worlds

Nearly every slider and switch on the ARP 2600 front panel is hard-wired to a specific control source. Having hardwired pathways gives you immediate control over all the 2600 has to offer, allowing the instrument to be played as is, with no patching required. In true modular fashion, when you’re in the mood to roll up your sleeves, throw some patches, and dive into sound design; inserting a patch cord into the jack associated with any hardwired control interrupts that internal connection, letting you create an entirely new signal path to suit your needs. As a programming aid, the 2600’s famously detailed panel graphics clearly display the available signal routings and provide insight into the instrument’s architecture. It’s this marriage of sophistication and ease of use that sets the 2600 apart from other vintage analog synthesizers. Whether you’re an accomplished synthesist or seeking to become one, the ARP 2600 will seriously up your game.

Unlike earlier modular synthesizers that relied on full-size 1/4" jacks and patch cables, the ARP 2600 uses the more compact 3.5mm Bantam (Tiny-Tel) jack that allows for more patch points to occupy the same amount of panel space, giving you more options and greater versatility. Most of the patch points are arranged in a single row below the controls of the individual sound modules. This arrangement keeps the main panel clear and unobstructed for tweaking the controls you need to get to fast during a performance. A major bonus is that the 2600’s onboard processors and patch points can be used with other modular and Eurorack synthesizer systems.

While being faithful to the original design, the 3620 keyboard that comes with your 2600 contains several important enhancements. Featuring 49 full-sized keys, channel aftertouch, and portamento, the 3620 is also duophonic, which means you can play two keys at once, with options for single or multiple triggering. During a performance, you can use a footswitch to lock the interval between any two notes, without revisiting the oscillators. You can add Vibrato via a dedicated circuit controlled by aftertouch, or by the onboard LFO (Low Frequency Oscillator) with your choice of three waveforms. A modern, flexible Arpeggiator has been added that lets you manually sequence and play back your custom patterns. Carried over from the original are the Pitch Bend knob and the 2-octave up/down Transpose switch. A secure 8-pin DIN cable now connects the keyboard to the main unit.

The ARP 2600 reveals its modularity through the unique assortment of esoteric, patchable modules it contains. To start with, there’s a set of parallel-wired Multiple jacks to enhance your routing options, for example, by allowing the same control signal to be sent to multiple destinations. Three independent Voltage Processors generate scalable control voltages, or can be used to attenuate any control signal, while the Lag Generator can be used to smooth out a control signal.

You can tune the 2600’s Noise Generator for White, Pink, and Low-Frequency noise, or anything in between, and a series of three Inverters can reverse the polarity of any signal. The Electronic Switch can be sync’d to either the 2600’s internal clock or an external clock signal, as can the Sample & Hold rate. The ARP 2600 also includes a dedicated Preamp and Envelope Follower for processing external audio signals.

Back in the ’70s, VCOs (Voltage Controlled Oscillators) could be notoriously unstable and tended to drift when operating temperatures rose. ARP’s modern VCOs, on the other hand, deliver extremely stable tuning under any conditions. The three oscillators on the 2600 feature Initial Tuning and Fine Tuning sliders, and you can designate any of them as an audio oscillator or an LFO (Low Frequency Oscillator) for modulation purposes. (Additional LFO modulation sources are available on the included 3620 keyboard.) Each oscillator is capable of generating multiple wave shapes at once, including Sawtooth, Square, Triangle, Sine, and Pulse. The Pulse wave of Oscillators 2 and 3 include a manual Pulse Width control, while Pulse Width Modulation (PWM) is available on Oscillator 2. To create analog FM (Frequency Modulation) effects, one audio oscillator can be used to modulate the frequency of another audio oscillator.

The ARP 2600 is equipped with a 4-pole Voltage Controlled Filter (VCF) with a roll-off curve of 24dB/octave. As with the oscillators, the 2600 filter also offers a Fine Tuning slider that allows precise control over the pitch of the self-resonating filter, which you can use to great effect. The input mixer stage of the VCF includes sliders for each Oscillator, the Noise Generator, and the output of the Ring Modulator. Historically, the 2600 went through a number of changes over its decade of production. Some of these were cosmetic, while others — notably the filters — were more sonically crucial. Today’s ARP 2600 is equipped with a Filter Type switch that lets you choose between a response characteristic of either early- or late-model 2600 filters.

The ARP 2600 houses two Envelope Transient Generators (EG). The first is a full four-stage Attack, Decay, Sustain, and Release Envelope. The second EG offers variable Attack and Release only. The Manual Start button allows the Envelopes to be re-triggered at any time, without using the keyboard. The Envelope module also provides both Gate and Trigger outputs — perfect for patching into another analog modular or Eurorack synth.

The 2600's Voltage Controlled Amplifier (VCA) features both Linear and Exponential control inputs, and the Initial Gain setting provides continuous output at its highest settings. Following the VCA, the audio signal of the ARP 2600 passes through the Stereo Mixer section and the internal Spring Reverb tank before continuing on to the main outputs, the headphone jack, and the internal stereo speakers.

In addition to the 3620 keyboard enhancements, today’s ARP 2600 is equipped with two low-impedance XLR outputs (Left and Right) for direct connection to a recording console or a PA system — which means you don’t need a direct box or line-matching transformer as you did with the original. A headphone output is also provided. MIDI is sent and received via standard MIDI In, Out, and Thru jacks — and also via USB. Three footswitch jacks (footswitches available separately) on the 3620 keyboard give you hands-free performance control over Portamento (On/Off or Momentary) and the Interval Latch. The front panel offers a Preamp input for processing external audio sources.

Cornerstone of the synth age

It would be impossible to overstate the significance of the original ARP 2600. It was launched at the 1970 Audio Engineering Society convention, and over the next decade, it would make ARP a major American player in analog synthesis. The 2600 would go on to become one of the most highly coveted instruments from the vintage synthesizer era, attaining holy grail status among musicians, producers, and sound designers. Today’s limited-edition ARP 2600 is your opportunity to own one of the most sought-after instruments from the golden age of analog synthesis. Appropriately, considering its professional bona fides, your 2600 comes complete with a custom road case with casters and separate compartments for the synth, keyboard, and cables. This is the one you've been waiting for. Don’t let it slip away!